There are some projects that come around that are just different than others. There’s just
something about them. Something special you can see and believe in when it comes to the
client, to their product or offering, to their mission or vision. ThinkUp! was one of those projects.

When Jennifer, VP of Marketing & Brand Strategy at Mentoring Minds, approached us with this project, the challenge was clear. Communicate what ThinkUp! provides, make it engaging, and also

“This was an ambitious project for Mentoring Minds. We’d worked with LC in the past, but never on something of this scale. But this project—how to show critical thinking in action—had been on my mind for a while. When I called Wilson to talk to him about it, I knew right away that he could take my vision and transform it into something real and tangible. [The Lemieux Company] team worked with us from start to finish.” 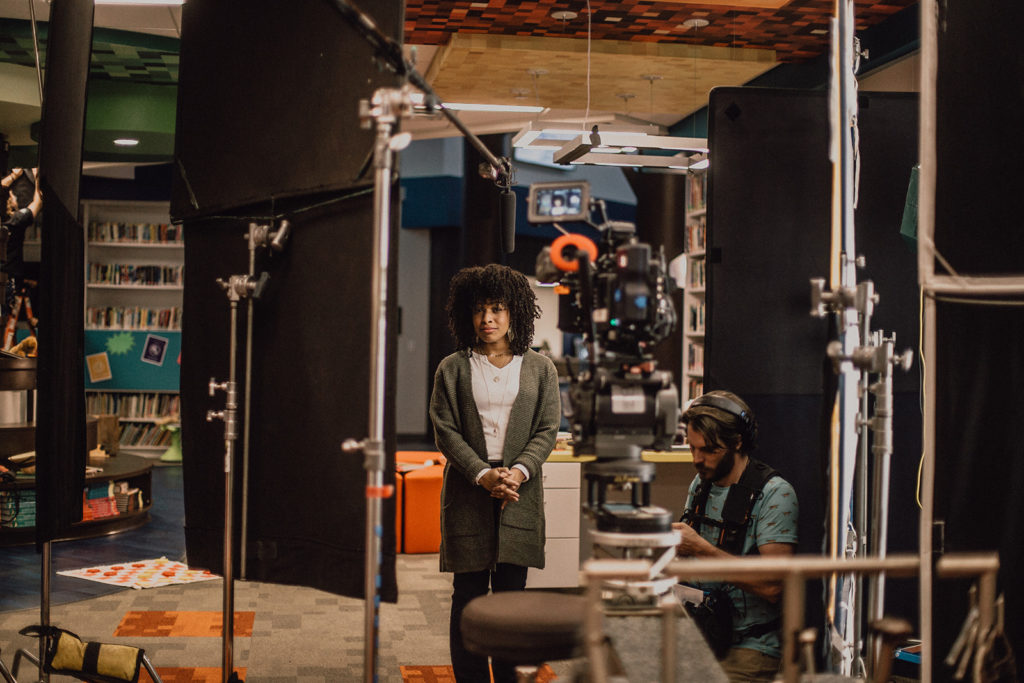 “Yes ma’am!” we said with hearts full and brains buzzing. We were off to the races.

We were given a month from that first meeting to completely create the concept, clearly communicate it, get it approved, lay the groundwork in pre-production, book the talent, find the location, build the sets and get this sucker shot. So let’s start at the beginning.

Mentoring Minds is a national K-12 publisher. They’re leaders in their industry, true trendsetters and at their very core—champions of a market that truly serves students and teachers in schools across the United States. ThinkUp! is a curriculum that helps students build critical thinking skills and connect math, science, and English Language Arts to the real world. It also unpacks and explains all the standards and gives teachers access to proven instructional strategies for planning content-driven lessons, differentiating instruction, and creating thinking-centered classrooms.

Most importantly and simply put, ThinkUp! is a product that empowers the kids to be the heroes of their own stories and positions teachers as the guides to unlock their students’ full potential. 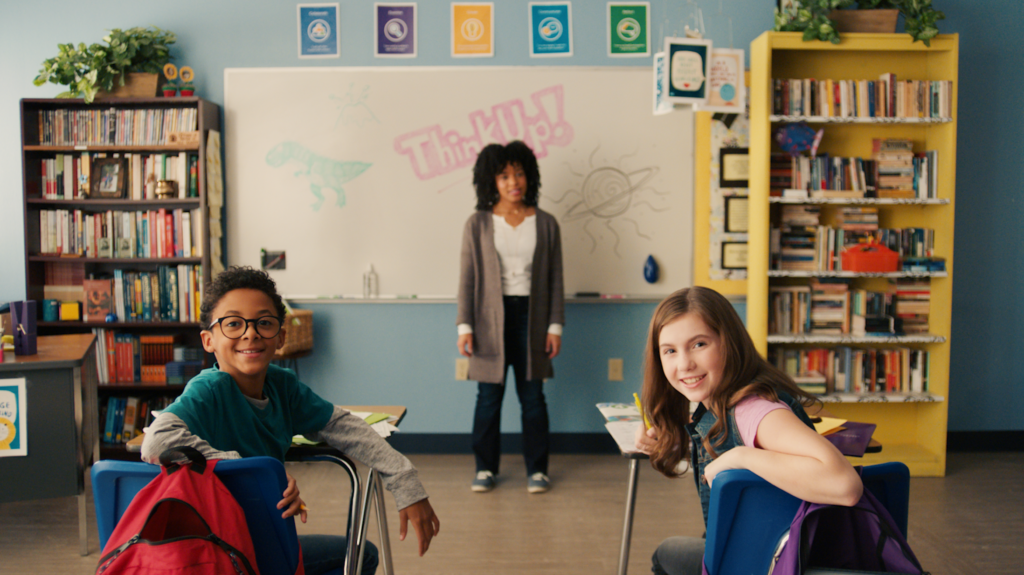 So how do we tap into that? So often we’ve found that all the information you need is right in front of you.

What was so impressive about [the LC team] was how they took a great concept and made it even better through each step. We were so pleased with how LC understood our story and brought it to life in both a meaningful and creative way. We also experienced how their attention to detail in both the big and little things provided the depth and authenticity we needed in this project.

Mentoring Minds’ tagline is “Critical Thinking for Life!” Core to Mentoring Minds and the ThinkUp! product line are the 9 Traits of Critical Thinking. By incorporating these research- based nine traits – adapt, examine, create, communicate, collaborate, reflect, strive, link and inquire – into the classroom, educators can guide students towards more successful thinking and learning outcomes.

We knew the students were ultimately the heroes of this story and we knew that the teachers needed to be the guide. So, the idea that was ultimately pitched and accepted was to create a world  featuring two students and a teacher. Using the nine 9 separate traits of critical thinking, these three main characters could change an everyday classroom into a fantasy world that fosters sound education.

Exploring the worlds of Science, Math, and English Language Arts led us down the path of a science lab and black holes, a library turning into a jungle, featuring all manner of dinosaurs, and finally, a math class with a recreation of the Empire State building. As film nerds we also wanted to loosely tie these scenes to movies we love and grew up loving.

The space scene was inspired by Interstellar, the jungle/dinosaur scene was influenced by Jurassic Park, and the building scene leaned on our love of Good Will Hunting. “Your girl here is wicked smart.” 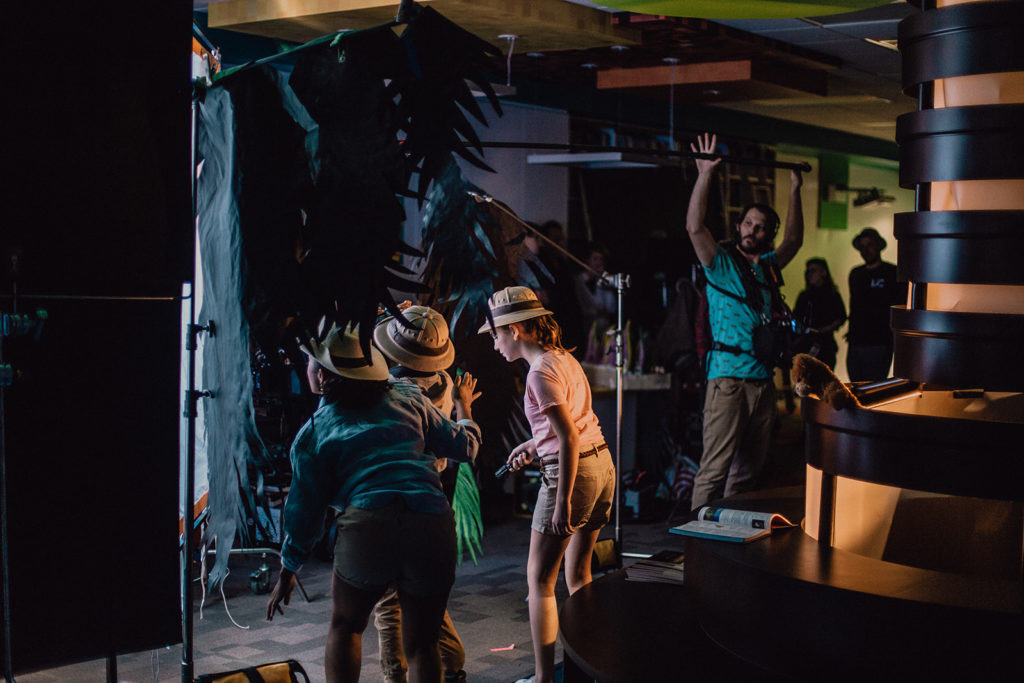 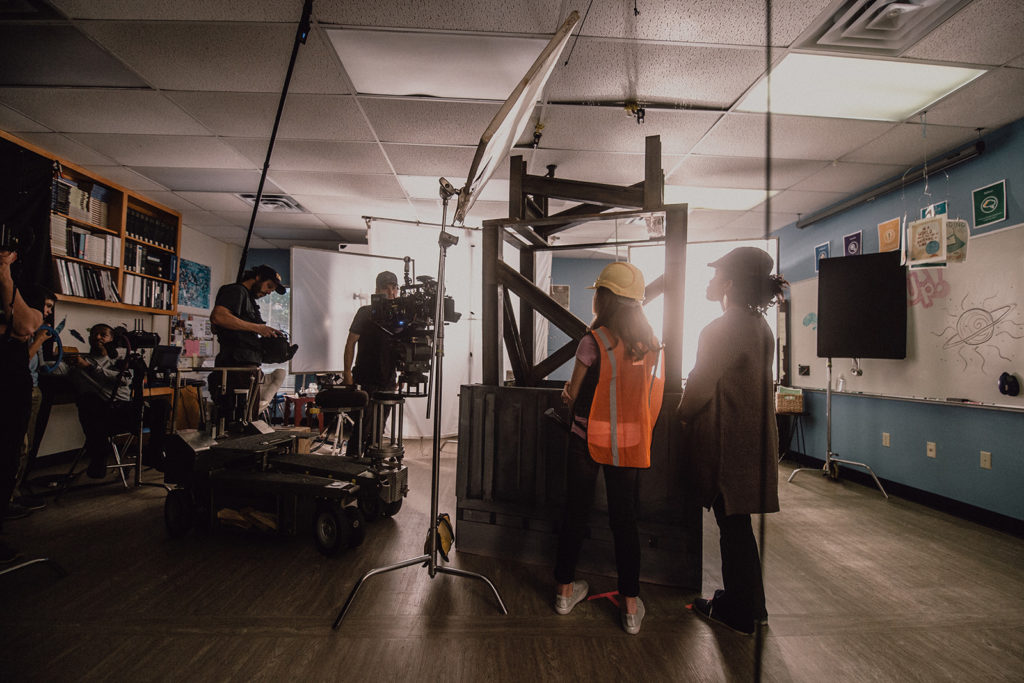 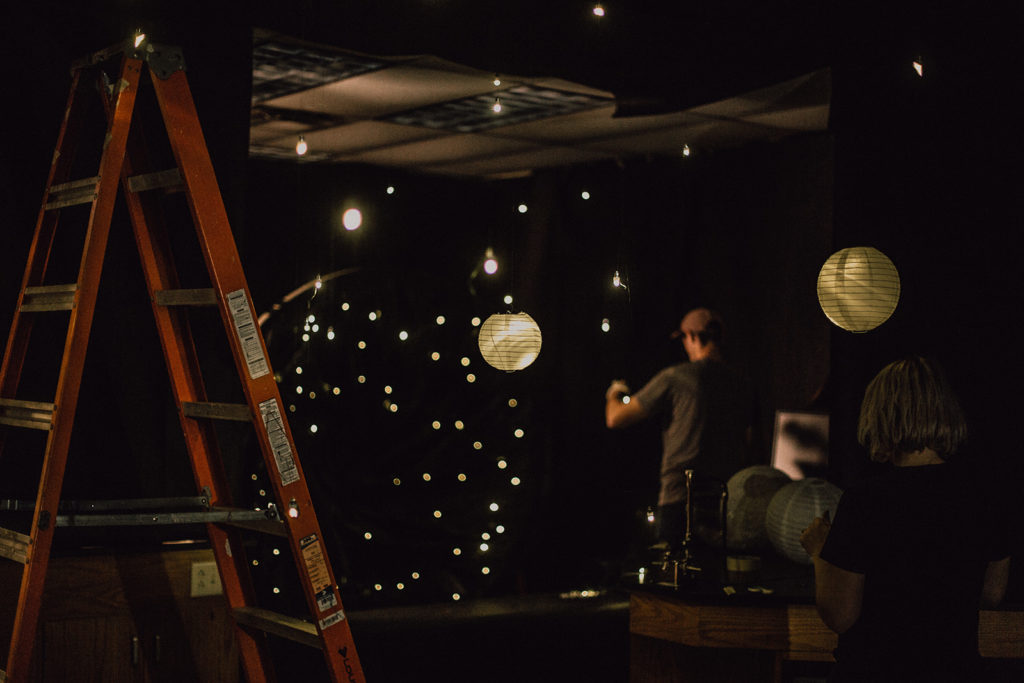 It was important that everything seemed as though it could happen at any school, anywhere, on any given day.

“It was never a thought to make ThinkUp! seem as though it was a product not available to all schools or students. The decision to take out extras, to make the fantasy worlds so whimsical and charming by using animation and theatre-like practicals for production design, to put the focus on the students and teacher rather than just the product itself… all of those decisions were made intentionally so as to have teachers see themselves in our teacher. To have them see their students in the students on screen. The entire concept was to display ThinkUp! as the extra step, the extra tool in the tool box that could turn any school room into a stage for critical thinking.”

We wanted the teacher to be warm and approachable.

In the weeks leading up to production, it was important to both the client and us that our instructor come across as a young, hip Ms. Frizzle. Tapping into the nostalgia of Mentoring Minds’ audience as well as showing someone who was relatable was paramount to the success of the project. Enter Venessa Pierre Pierre, an up-and-coming star who is undoubtedly destined for greatness. 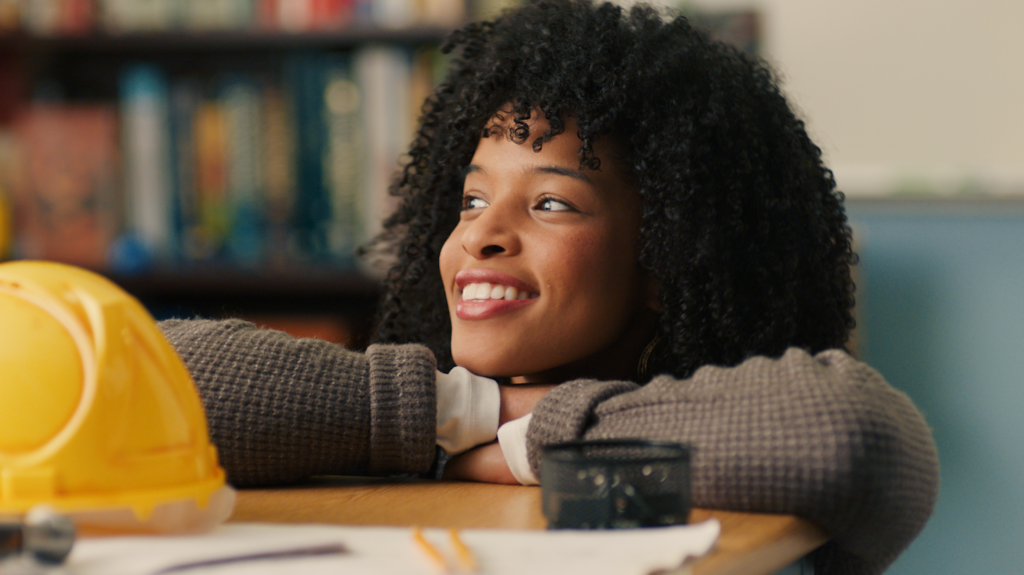 The kids had to be kids.

That sounds silly at first glance but finding child actors who are well trained and can still provide an authentic performance is no easy task. Emori Raja and Sophie Proctor were the perfect fit for the project. They showed up ready to roll every morning and were able to pivot when needed. 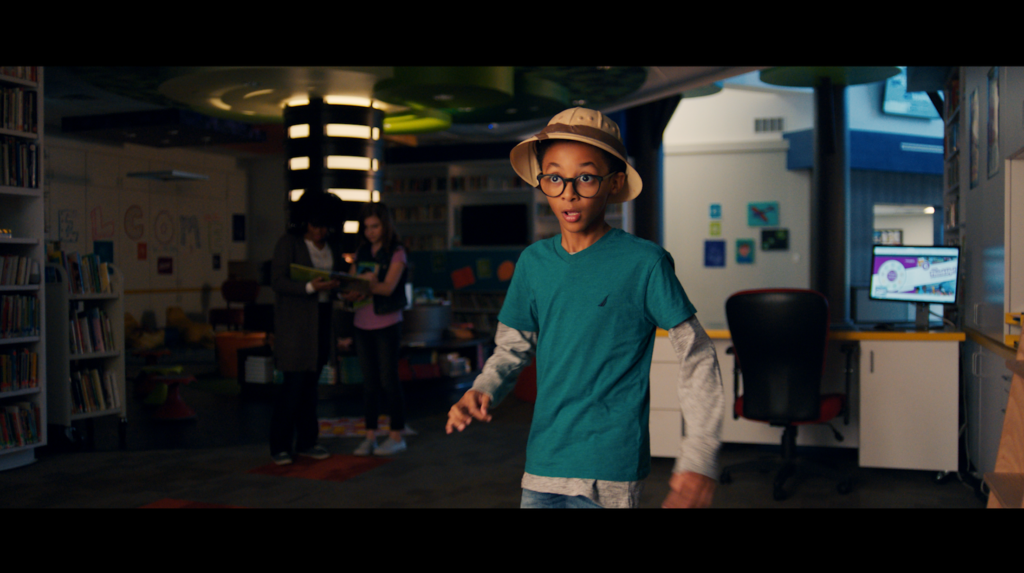 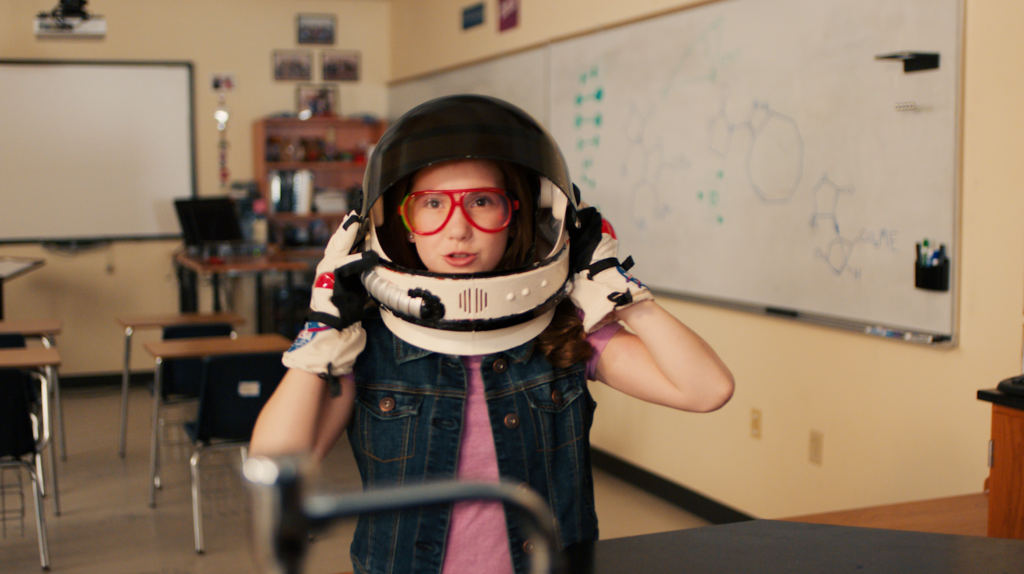 This entire brand film and supporting campaign was shot over the course of three days at a private school in Tyler, Texas around mid-November. School had not let out yet, either, so it was crucial to plan around and not to interrupt students learning on a day to day basis that week.  It took precise planning and tons of communication back and forth with location to make it all happen. 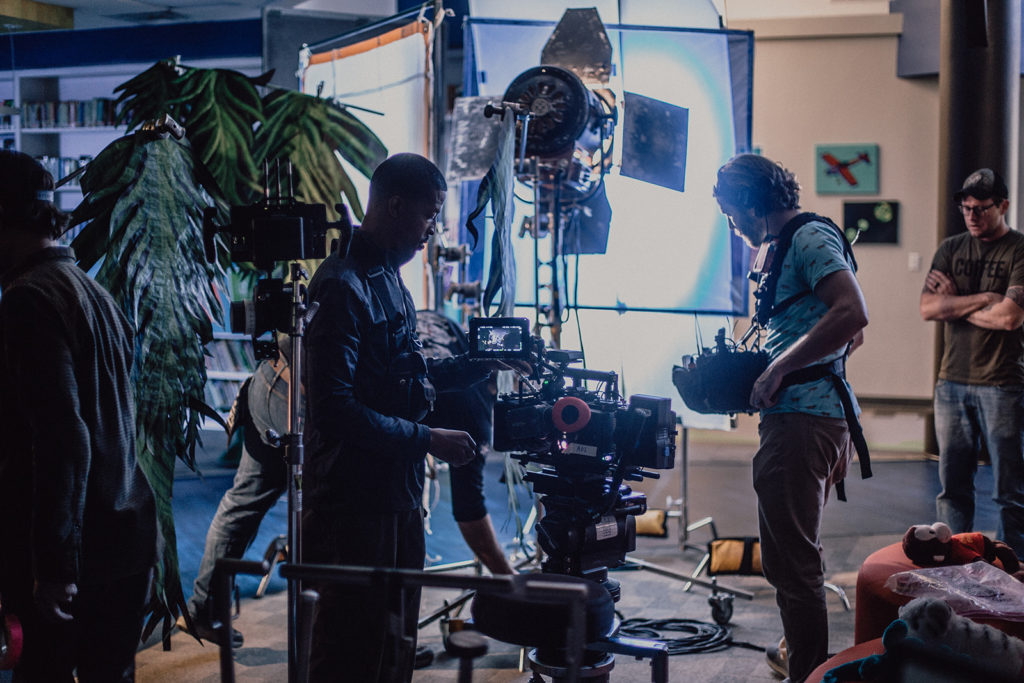 It is important to note as we wrap this lengthy blog up that none of this is possible without great people and great culture. Mentoring Minds has a long track record of being incredibly fun to work with and for, so we knew that would be a given. What was the most exciting about this shoot, given its baked in difficulties and long hours, was how much fun the crew had together. That’s something we take great pride in. Creating a great deliverable is one thing, but having fun doing it in stressful conditions for close to 36 hours? That’s a challenge in its own right.

[Lemieux Company] was an incredibly talented and experienced crew for this project. Despite the long hours and logistical challenges that came with filming during school hours, it was an absolute joy to work with every single member of the team. My team at Mentoring Minds learned a great deal just from being on set and watching them work. The creative energy on set was palpable.

All of that to present ThinkUp! Our most ambitious project to date. We’ve been sitting on it since January and it’s so great to see it out in the wild. The relationship we’ve had with Mentoring Minds over the years has been one we’re very proud of, so to take the next step in the evolution of our company with our friends in Tyler, Texas has been a gigantic opportunity that we were happy to be stewards of.

When I saw the rough cuts of the videos, I was astounded. And when I saw the final outcome? It exceeded my expectations.

Take a look at the BTS photos and video while you’re here!

Want to turn a hallway into a jungle or a science lab into outer space?

Okay that’s fine, there are plenty of other things we’re happy to tackle with you. Drop us a line through our contact form or give me, Wilson Lemieux, a call at 806-502-8383. We’re dying to do something fun like this again.